A guide to Trollbeads Precious and Semi Precious Gemstones

Here is a truth for you- I am crazy about Trollbeads Faceted Stones. As in I do no think a bracelet of mine could possibly be complete without at least one. I sometimes use them to complement beads I already have, or I am inspired by the stones meaning and create the design around them. Whether or not you believe in stones having healing powers or energies you cannot deny they are gorgeous and the cut of them adds such a beautiful shine and life to any bracelet.

Here are a few of my favorites: 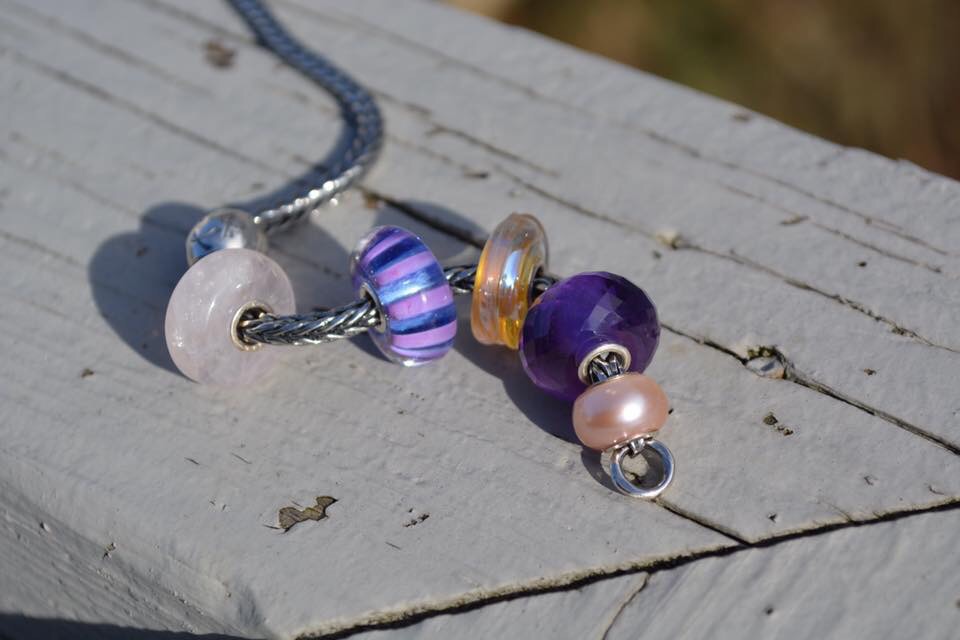 Since the ancient Greeks amethyst has been used in jewelry design and adornment. It had been believed that Dionysus himself was responsible for the deep purple color of the stone, because he had poured wine over white stones to make them more than pleasing and because of that association Ancient Greeks also believed that amethyst cups and jewelry would prevent any sort of inebriation. 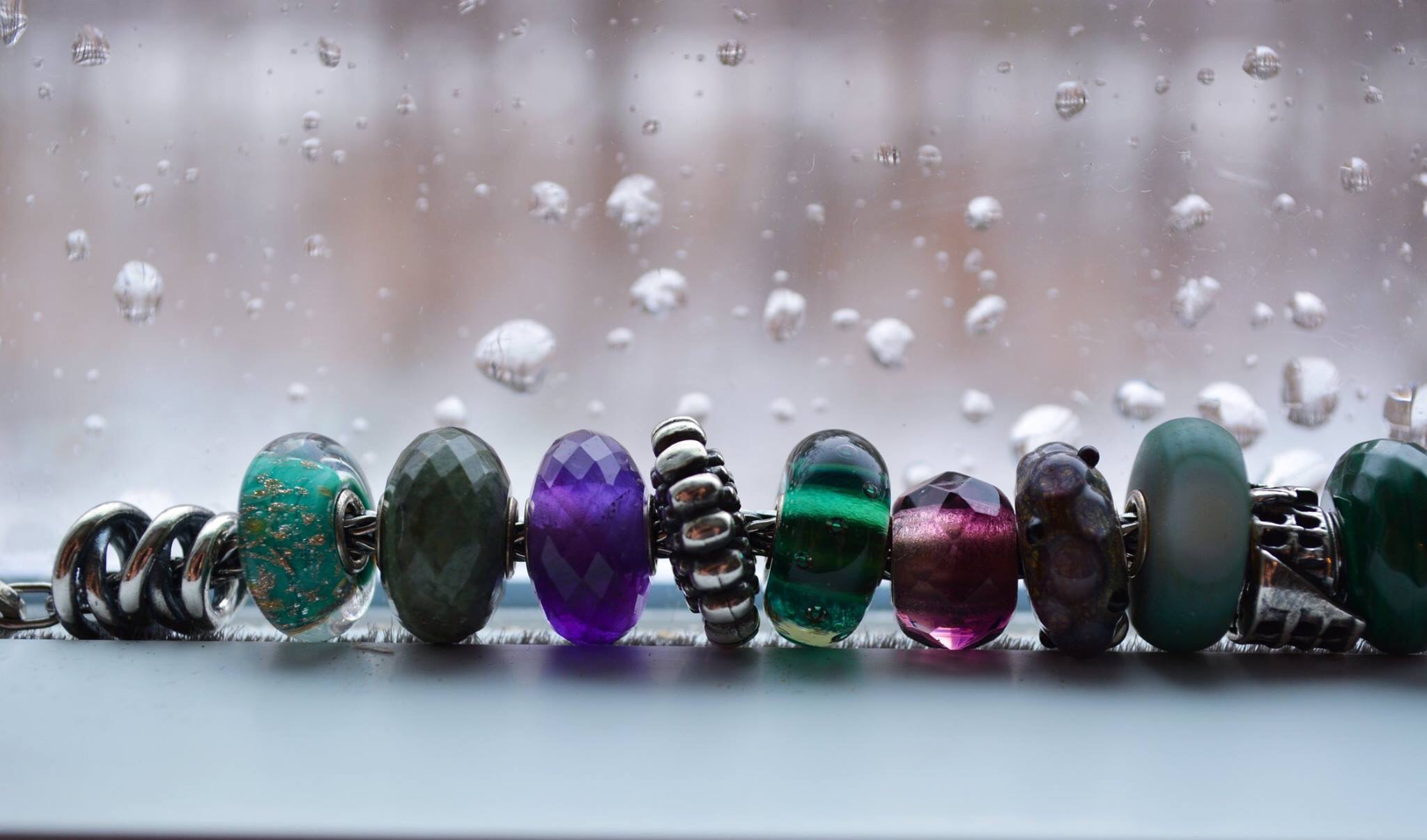 We know now that even though they do not have that particular function they are still quite pleasing. Varying from deep purple, to almost lilac and transparent, amethyst has a wide variety of color and clarity. I, personally, am a sucker for very dark amethyst and this bead is actually one of the only beads I do own more than 2 of. 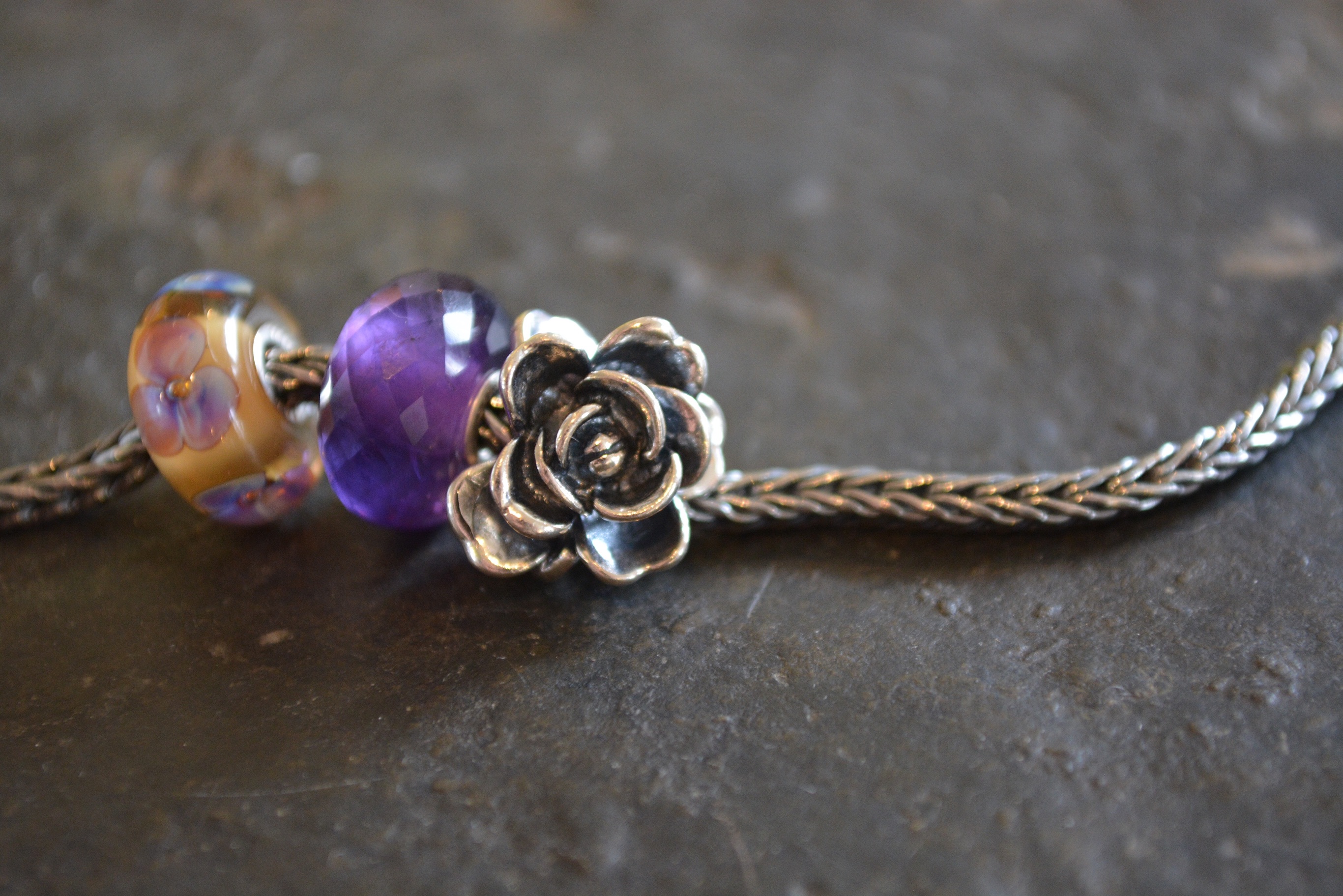 1.) Amethyst is the birthstone of February, but has also been used historically as a birthstone for November as well.

2.) Amethyst has a very rich history, showing up in Ancient Greeks, deep in Hebrew legend on a high priest's breast plate, in Anglo- Saxon's grave sites and in ancient Egypt, where people believed it would ward off guilty feelings.

3.) New Age Healers believe that Amethyst is a very powerful stone that provides power and protection and also aides in healing.

4.) Amethyst is believed to help with insomnia.

5.) Amethyst used to be considered a precious stone, but due to new mining techniques it is now easier to find and considered semi-precious. 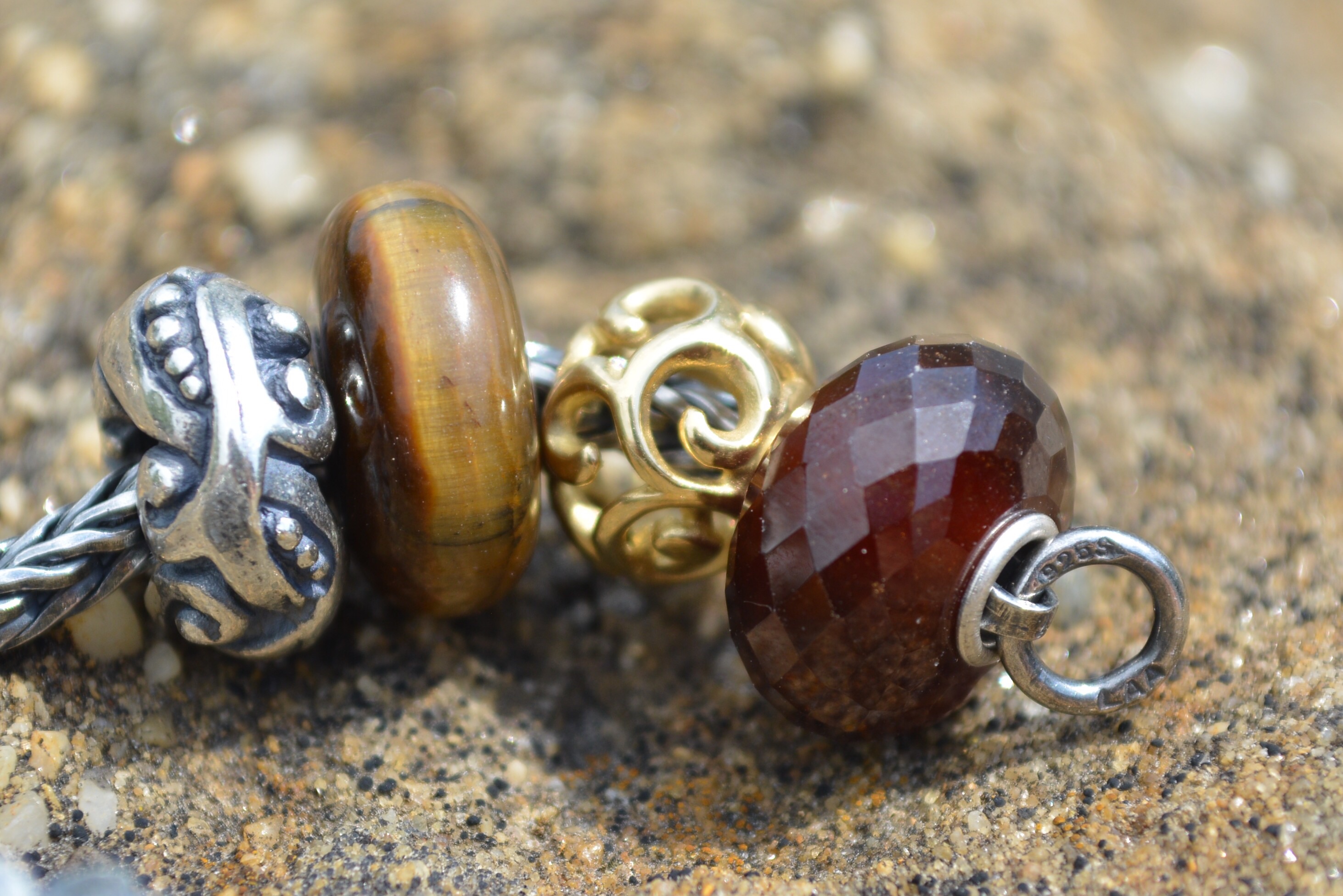 Another stone with huge variations, having these beads delivered is always a fun surprise for us. You never know what to anticipate! Garnet has been used in jewelry for over a millennia and received its name from the Ancient Greek word for seed, probably in reference to a pomegranate seed, which the stone shares its beautiful deep color. Garnets are the birthstone for the month of January. 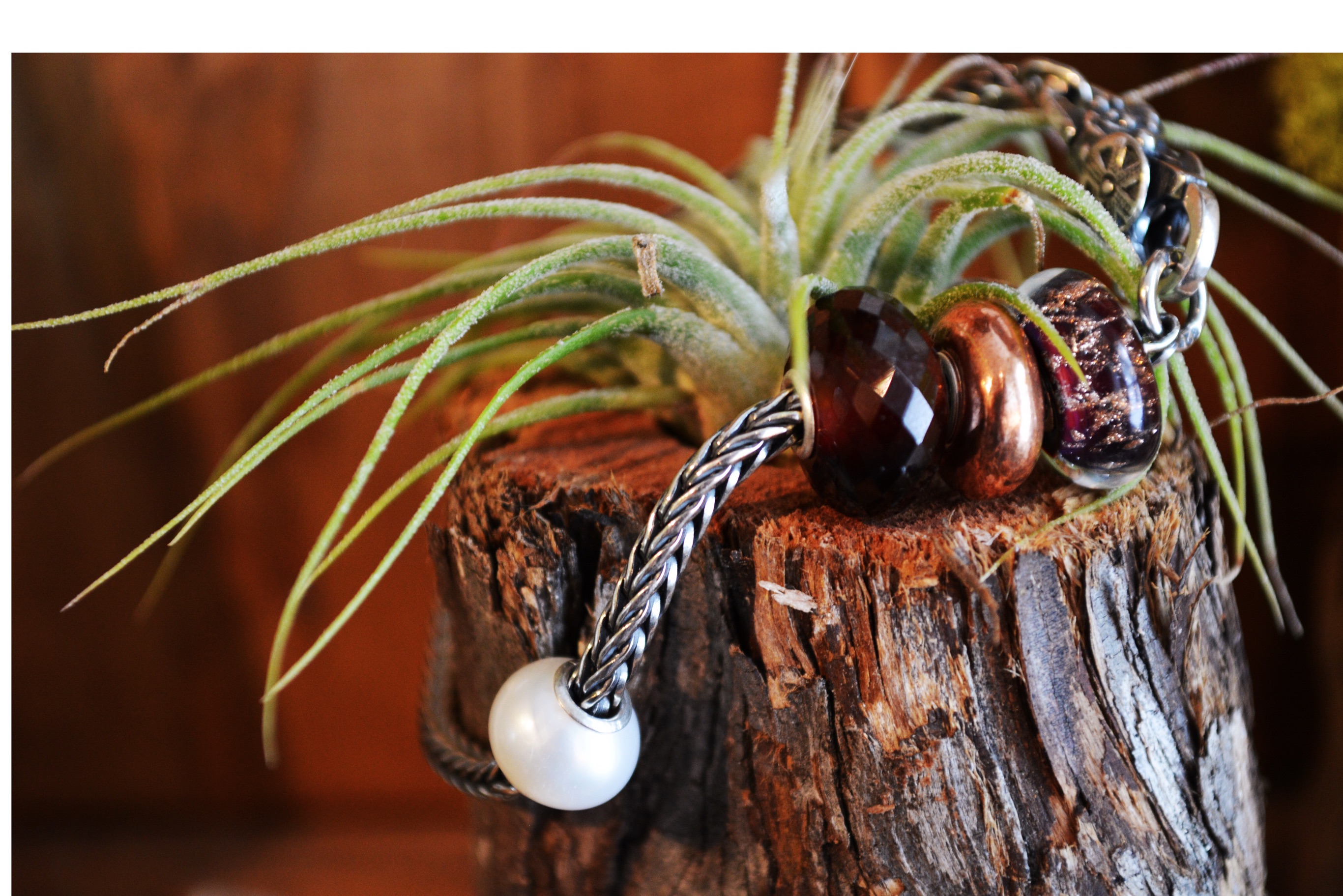 1.) Garnets are said to have the ability to help one access past lives and are the preferred stone of new age healers for taping into ancient knowledge.

2.) Garnets are the least used of all the precious stones.

3.) Garnets can have a huge range of color. Most commonly red they also show up in pink, yellow, green (which I would LOVE to see!), orange, brown, black, blue, violet, purple.

4.) As a protection stone garnets are believed by Eastern healers to release bad karma and protect the wearer from dishonesty.

5.) Garnets are also said to be a excellent for manifestation. It is used to ground one's dreams in reality, bringing abundance, prosperity, and realization of those dreams.

After all this stone research I am considering adding a few more garnets to my collection. 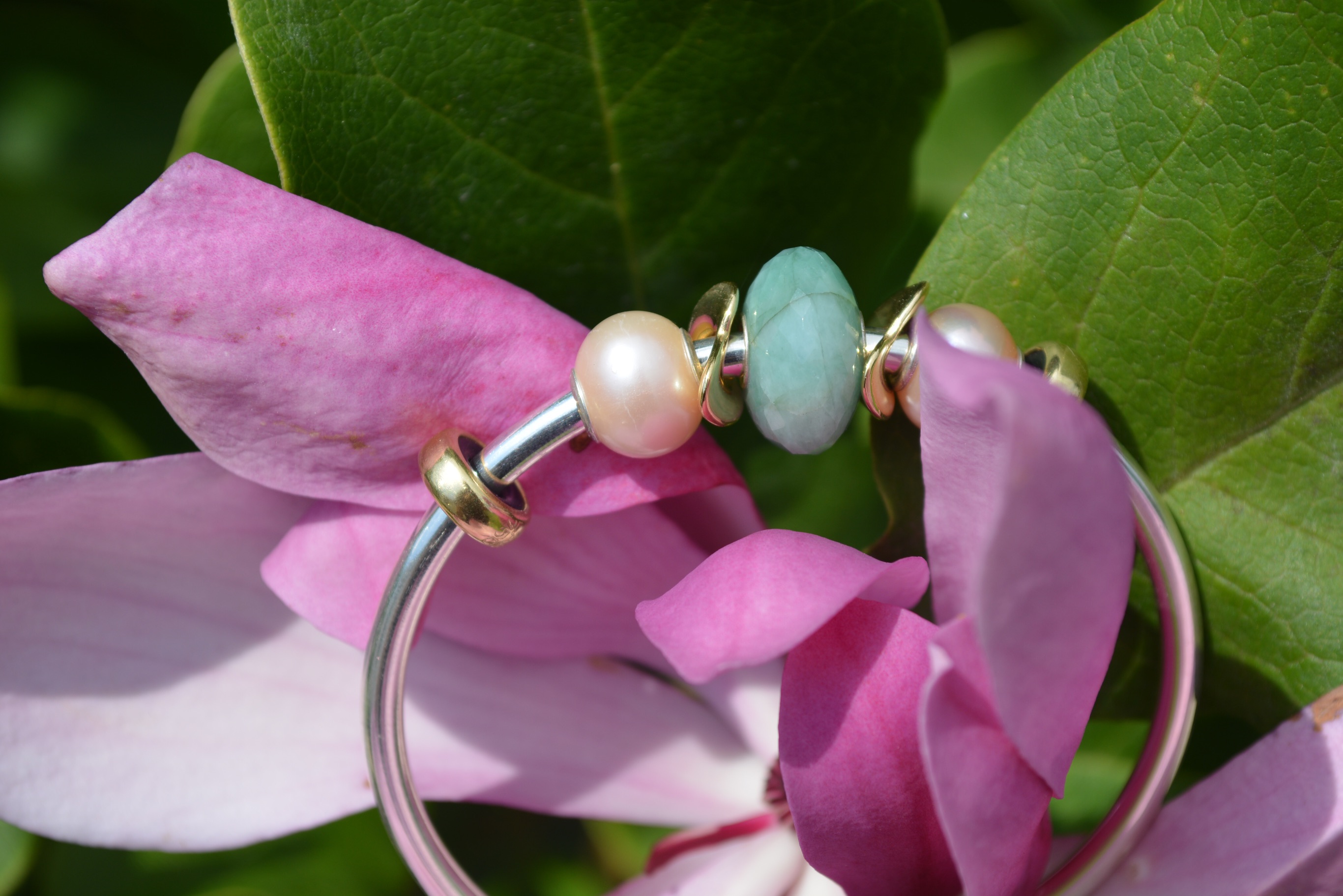 Emeralds from Zimbabwe are among the oldest gemstones anywhere in the world. They were already growing 2600 million years ago, whilst some specimens from Pakistan, for example, are a mere 9 million years young. Emeralds in the Trollbeads world are generally lighter than the understood "emerald green", but still provide a lush and beautiful highlight for your bracelet. If you are looking for a more traditional emerald green colored stone I suggest checking out Malachite which you can find here: https://trollbeadsakron.com/trollbeads-malachite/ .

1.) As the sacred stone of Athena, the goddess of love and beauty, Emeralds were believed in Ancient Greece to preserve love.

2.) Emeralds are the birthstone for the month of May.

3.) New Age healers believe that emerald is a stone of great vision and intuition, associated with the eyes and sight, believed to foretell future events and reveal one’s truths. It is said to be a stone of wisdom, enhancing memory and increasing mental clarity.

4.) Emeralds were the favorite gem stone of Cleopatra

5.) Emeralds are also the traditional gift of a 55th birthday or anniversary. 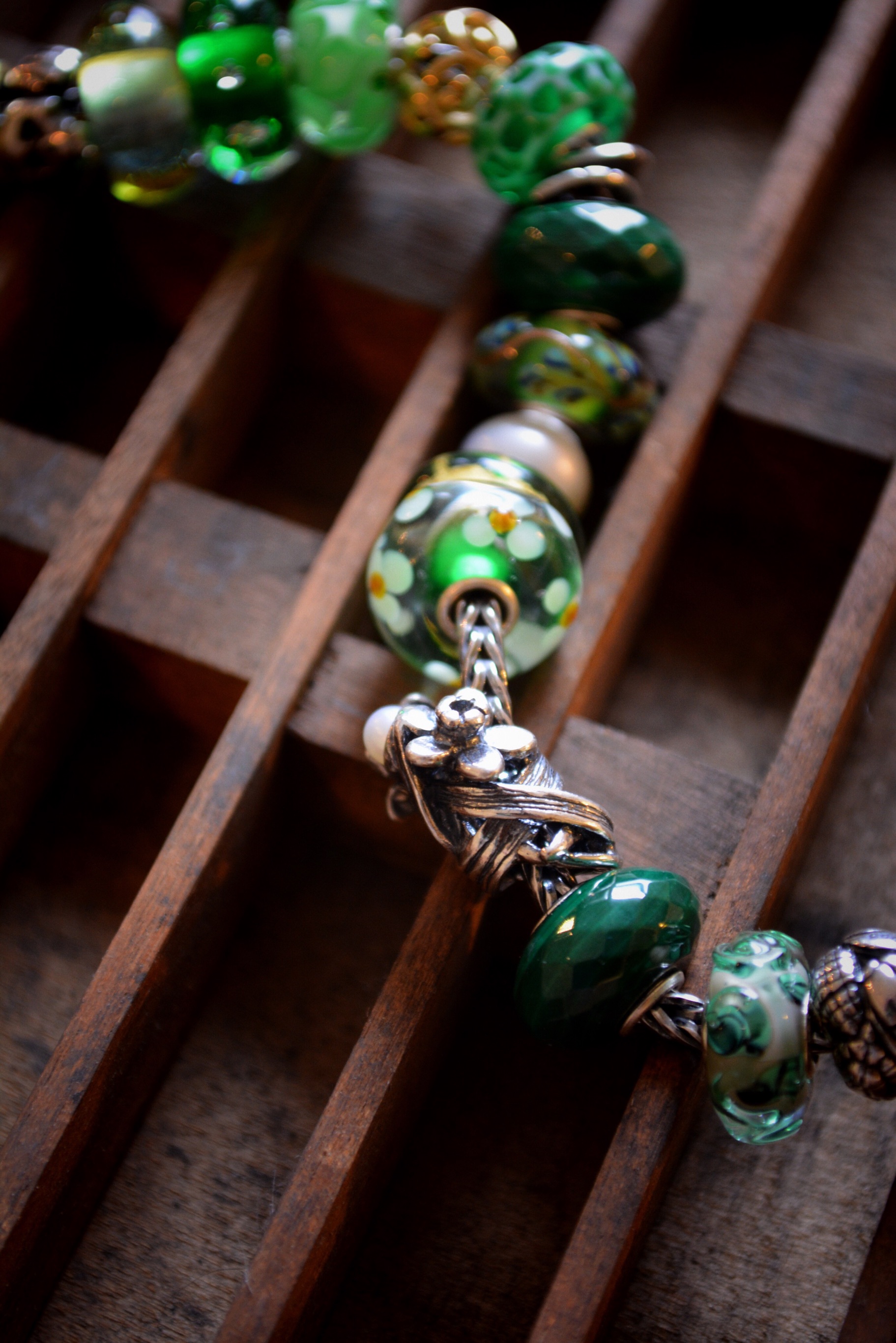 This was a stone that I, personally, was very happy to see come into the collection. I had been hoping for something brilliant green after seeing how pastel most of the emeralds from Trollbeads show up and this fit the bill! I really like using this by itself on my 23.6 in fantasy necklace, it is so brilliant it can stand alone easily. 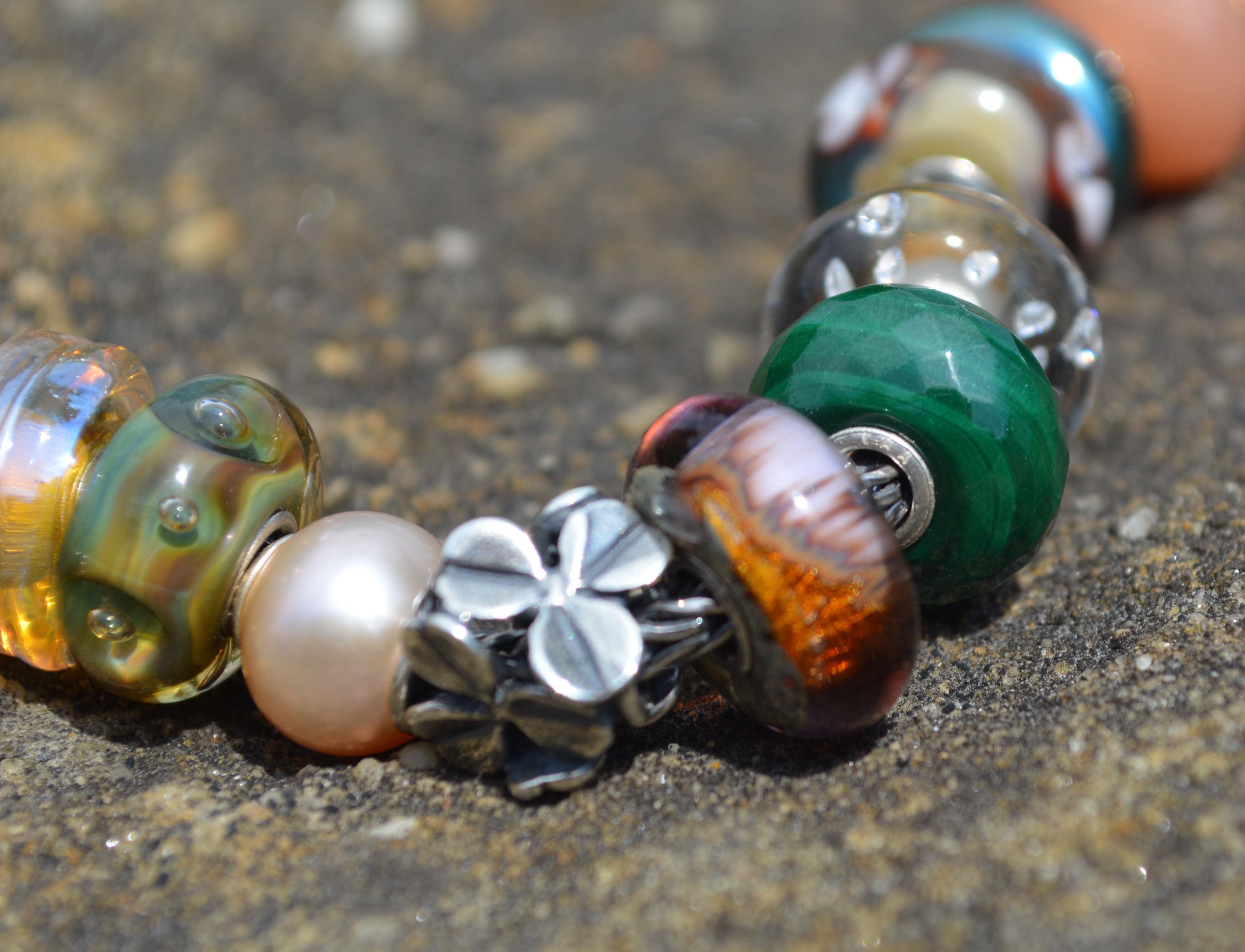 1.) In ancient Egypt malachite was ground and used as eye shadow!

2.) In the Middle Ages, Malachite was believed to protect against the "Evil Eye" and to cure various stomach ailments.

3.) It has been worn to detect impending danger, and was assumed to break into pieces when danger is near in Europe during the Middle Ages, therefor earning the nickname "the guardian stone".

4.) Malachite can be found all over the place and has been mined in the United Kingdom, France, Romania, Russia, the Congo, Morocco, Zambia, Namibia, Zaire, South Africa, Southern Australia, Chile’ and in Arizona, New Mexico, and northern Michigan.

5.) Is St. Isaac's Cathedral in St. Petersburg Russia there are entire column made of Malachite! 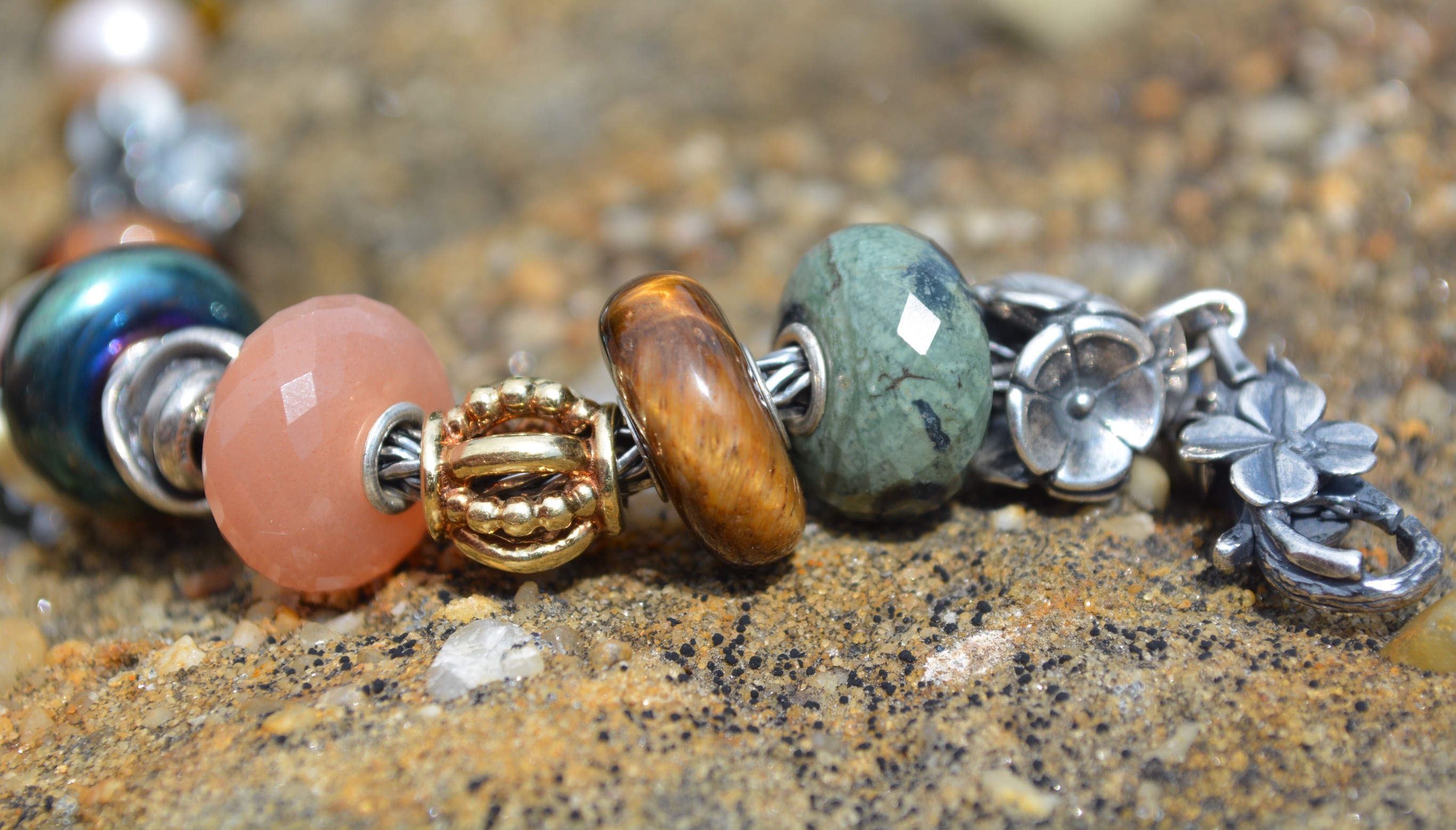 Another great feature of this stone is the highlights, that are very comparable to the highlights and streaks in the Labradorite beads- quick flashes of light and shimmer. People from India to Rome believed that moonstone fell from the sky and associated it with the moon, hence its name because they thought that was the only way to have something trap so much light.

1.) Trollbeads Feldspar Moonstone is a lovely champagne color, but Moonstones are usually blue.

2.)Moonstone is said to be a good luck stone.

3.) Moonstone is used by healers to stimulate the functioning of the pineal gland and balance internal hormone cycles with nature's rhythms. Moonstone is a stone of inner growth and strength. Though often considered to be a woman's stone, it can be beneficial to men in opening the emotional self.

4.) It is said that a moonstones powers are strongest during a full moon. 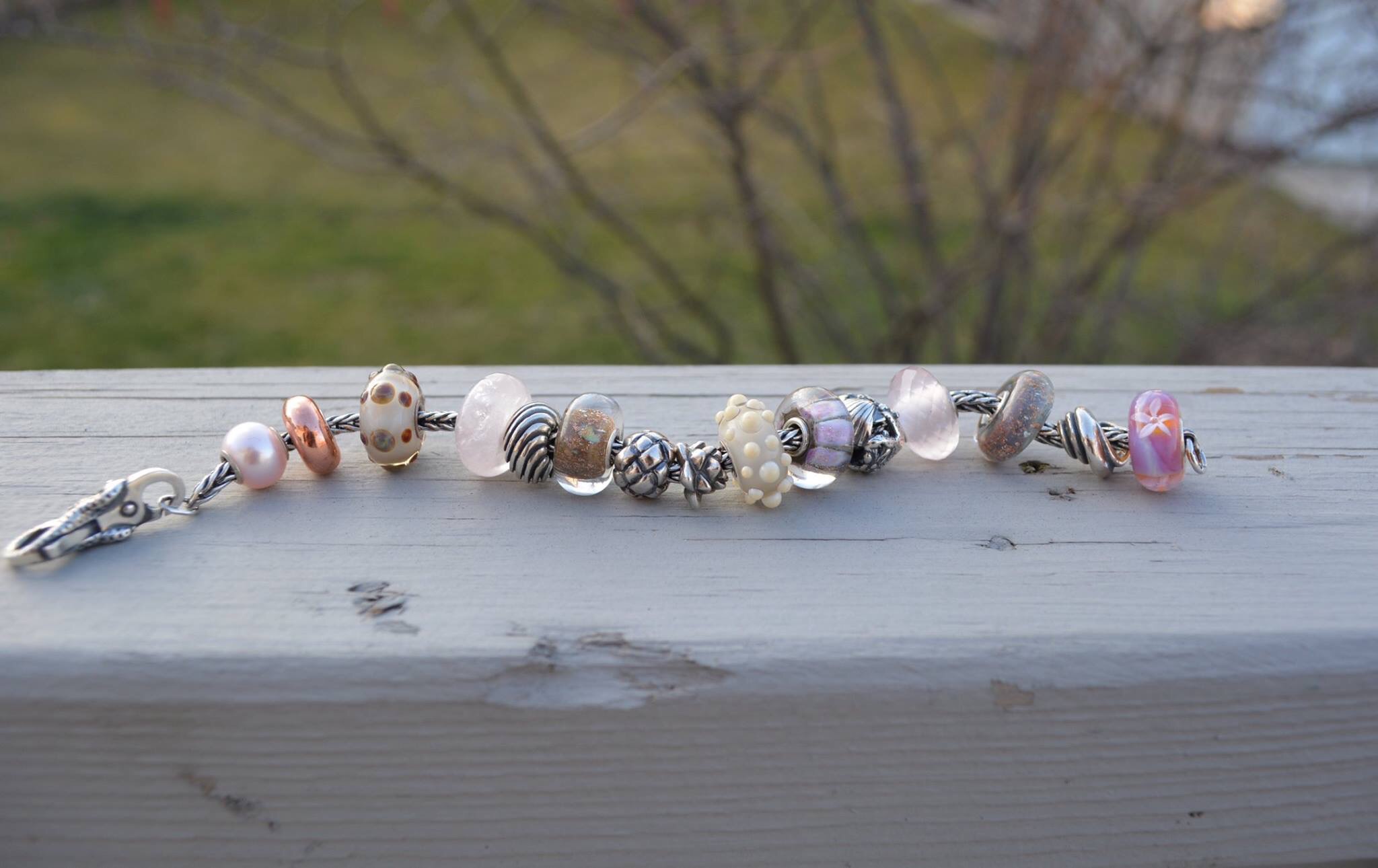 Total confession, I am so crazy about Rose Quartz, but I do find myself using the faceted much more often than the round. Don't get me wrong, I use both often, but the faceted is more of a crystalline color and picks up more light. I think that this shade of light pink makes a really amazing unexpected basic, there are really no earth tone bead this will not compliment and it goes just as brilliantly with pastels.

1.) Rose quartz has been considered a symbol of beauty and love, and has been used for religious objects for thousands of years, and also for ornaments and gemstones.

2.) Rose Quartz is the alternative birthstone for January.

3.) Rose Quartz is photosensitive and can fade in sunlight.

4.) Rose Quartz can vary in color and in very rare instances can show up in blue or purple shades.

5.)Rose Quartz is an alternative to the traditional gift of cotton as the second anniversary gift.

I hope this has been an I lightening, or purely entertaining read! Check back with us for Part 2 of the Facet Fanatic Blog Series in August!